From this week’s Border Mail:

TALENTED St Patrick’s batsman Braedon Hensel made his long-awaited comeback to the cricket field in successful fashion on Saturday. 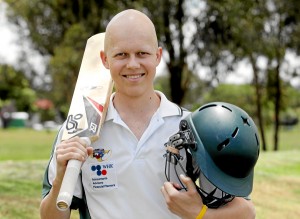 In his first competitive appearance for the club since being diagnosed with a sarcoma in his neck in April, Hensel made a more than handy contribution with the bat for Patties in their division 1 C-Grade clash with Lavington, crafting a match-turning 56.

Hensel, an A-Grade premiership player at the club, batted at No.3 for Patties, forming two solid middle-order partnerships with Chris Glenane and Mark Awburn, with Awburn also chiming in with a half-century of his own.

Despite making a strong contribution to the comfortable 116-run victory, Hensel said he was simply rapt to be out on the field again.

“It was nice to do something normal for a change.

“It worked out well for me with the washout last week as well.

“A few of the guys were away with schoolies as well so the spot opened up.”

While he was equally excited to see the talented youngster back in the green and white, St Pat’s president Vincent Jones admits he didn’t expect to see Hensel back out in the field so soon.

“It was fantastic to see him come back the way he did,” Jones said.

“To be honest, we’d written this year off for him but his determination, will and positive outlook is what got him back out there.

“To do what he did was just fantastic.

“It was great to have him back around the boys again.”

Hensel, who enters his 10th cycle of chemotherapy this week, is unlikely to play again this weekend, however, hasn’t ruled out playing again this season.

“I only really feel up to it just before I’m about to go back in for treatment,” Hensel, who has chemotherapy once every three weeks, said.

“If the opportunity comes up again and I’m up to it, I’d love to.”