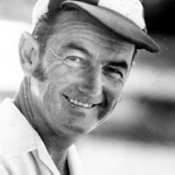 Looking for statistics? Check out the stats section of the site!

A couple of notable players from this era were Mr. J. McKenzie, who on four occasions during the 1921/1922 season took seven or more wickets. Not to be outdone, Dr. Gerard Kenna completed this feat on six occasions during the 1924/1925 season, with another eight wicket haul in the 1925/1926 season. During his career, Dr. Kenna took seven or more wickets on twenty occasions. He was inducted into the CAW Hall of Fame in 2012, along with another SPCC player in Jack Adams; in 2014 Norm Wighton was also inducted.

The next venture into competition cricket was the start of our current continuation to the 60th Anniversary celebrated in the 2015/16 season. In the 1956/1957 season, we entered A & C grade teams into the ABCA competition under the leadership of John H. McCormack, or “Little John” as he was affectionately known. The A grade team selected to represent the Club for the first game that season consisted of John H. McCormack (Capt), John Lynam, Bert Fletcher, John K. McCormack, Norm Wighton, Noel Wighton, John McDonald, Geoff Cox, John Osteraas, Noel Fielder, John Knobel and Alby Quinlan but, due to inclement weather, the game was washed out.

At times we have also fielded A Reserve & Colts sides, sometimes having 2 teams in the lower grades. In the 2015/16 season the Club entered a team into the District B Grade competition as well as A & B Provincial competitions.

The Clubs first taste of Premiership success for the current period came from our 1962/1963 C grade team led by Pat Baine. In the same year ABCA introduced the junior competition and our U15 team won the first ABCA Junior Premiership – the first of a hat trick for them. Our first ever A grade premiership came in the 1968/1969 season, under the leadership of Joe Adams, when SPCC defeated Churches-Kiwis at the Albury Sports Ground. Churches-Kiwis won the toss and elected to bat, making 148 in the first innings, (Bert Fletcher 3/38, John Dyball 3/15, Joe Adams 1/27) and scoring 212 in the second innings, (Bert Fletcher 3/77, Joe Adams 2/53 Jim Robinson 2/20 and John Dyball 2/243) lost to St. Patrick’s 311 in the first innings, (Joe Adams 157, Peter Friedlieb 77, a 4th wicket partnership of 185 between Joe Adams and Peter Friedlieb), and 3/50 in the second innings to win by 163 runs on the first innings. Premiership players were Joe Adams (C), Alan Bounader, John Dyball, Bert Fletcher, Harry Flood, Peter Friedlieb, John Kimball, Gavan Mackenzie, Jim Robison, Geoff Romero and Norm Wighton.

The disappointment experienced in the 1969/1970 season of the A grade, being beaten in the semi-final by eventual premiers Wodonga, was over the following week when the clubs’ B grade team won their first premiership. The A grade loss must have spurred the club on as they won premierships in the 1970/1971 and 1971/1972 seasons. We had to wait till the 2003/2004 season before we tasted success in A grade again followed by the 2010/2011 win.

The Club has been playing at Xavier (Aquinas College) since the early 1960’s. Our first home ground in the 1956/1957 season was the Albury Sportsground, and our training facilities were located in South Albury at what is now known as Waites Park. With the move to Xavier the Club was able to build training nets at our home ground with the first practise nets being built where the current student car park is before shifting to the St. Anne’s end of the old #1 oval, our main oval, until the end of the 2001/2002 season.

The end of the 2001/2002 season saw the club have a ‘Burning of the Pitch’ function, with all players from that season gathering on the centre wicket, which is now just outside the (blue) main assembly hall at Xavier, to farewell the ground. The School was growing and needed further classrooms to accommodate new arrivals, and the only spare ground was on the current sporting fields. This school expansion bought about the ‘birth’ of our current ovals.

The Club spent the 2002/2003 season playing at Albury High School oval while extensive works were being done to get the new grounds up. On 11/10/2003, SPCC B grade played North Albury – the first game on the new Xavier #1 oval, which was won by SPCC.

Over the next thirteen years we have seen many changes to these surroundings. The old Scout Hall became our change rooms, as they still are today. The ‘Chinese Restaurant’, as it was originally named, arrived in 2005 season, with a shelter extension added later. Currently the old building is being given ‘a new lease of life’. New training facilities had to be constructed with our move and, due to our growth, have been further extended to give us the best training facilities in the competition. The first Spectators Hill was constructed just to the side of the canteen area; an upgrade to area was completed for the start of the 2014/2015 season. The new area was dedicated to our inspirational young club member & player, Braedon Hensel, who fought cancer for four years before finally succumbing. The hill was opened by Father Kevin Flanagan and called “Pup’s Hill”.

Although the Club may not have won as many A grade premierships as some clubs, it has remained a force throughout the competition winning many lower grade and junior premierships.

In the 2010/2011 season the Club achieved the ultimate ‘triple crown’ of premierships in A, B & C grade competitions, a very rare feat for any Club, and one we are very proud of.