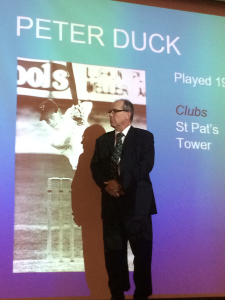 Peter Duck played A grade cricket from 1973 to 2000. He started his career as a wicketkeeper and middle to lower order batsman and developed into aggressive opening/top order batsman and exceptionally skilled gloveman. Peter was also renowned as an excellent captain and tactician who often performed on the big stage.

Peter represented the ABCA in a number of representative teams including Country Week in 1980, and the Toohey’s Cup team in 1983 (vs Wagga on 23 November 1983).

On 4 December 1983 Peter represented NSW South West Zone vs ACT in the quarter final of the TNT Roadfast Country Cup. On 21 December 1983 Peter played in the South West NSW team against the touring Pakistani side at Griffith. He was also in the representative team (22 February 1984) playing in Griffith against a Western Australia side that included the likes of Rod Marsh, Geoff Marsh, Graham Wood and Mike Veletta. He also played in the North East Victoria Country team vs ACT on 11-12 November 1984, top scoring with 48 runs. Peter opened the batting in all these matches.

In the 1982-83 season Peter won the ABCA Cricketer of the Year award.

Bill Ellwood (father of John Ellwood and grandfather of Will and Tom) was also inducted into the CAW Hall of Fame last night. Bill played with Talgarno in the 1920s and ’30s.