Our Provincial B Grade side play off in the 2015-16 Grand Final this coming weekend against Lavington.

Please get along to Xavier Oval to support the boys this weekend.

We had all our senior sides make finals this season.

The C2 side went down narrowly to Kiewa in the Preliminary Final on 5 March 2016.

The District B’s also went down narrowly to Eskdale in their Preliminary Final on 12 March 2016. With a team of 7 players under the age of 18 (and 5 of those playing under 16’s), even making it to the Prelim Final was a massive achievement – well done boys!

The Provincial A Grade side went down in a thriller at Xavier Oval to Wodonga in their Prelim Final over 12-13 March 2016. 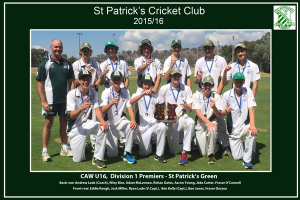